The Prosperity in People Foundation made their latest venture into Galway city, but what exactly is it they do? The foundation dedicates itself to offering vital services to Ireland’s homeless population. For founder Pádraic Rocliffe, the journey to tackle homelessness in Ireland has been a rollercoaster, to say the least…

Charitable organisations are often founded on the lows of life. Personal experience, tragedy, shock, loss. The core components would be enough to keep Joe Duffy busy for a lifetime and beyond.

Even still, there is almost always more than meets the eye.

On Twitter this week, Pádraic Rocliffe posted photos of his charity, the Prosperity in People Foundation, cutting the hair of Galway’s homeless population. His bio tells you he is a PhD candidate. A university tutor. The head coach of the UL swim club. A motivational speaker.

But, what it doesn’t mention is possibly the most incredible thing of all. Down and out at 19, his life changed forever during a stint in the US.

“Long story short I went out to the States and ended up in a car crash in Death Valley of all places. I broke my neck, my back, my leg, and my foot, but through that experience I had a very spiritual awakening.

I had no feeling down my left-hand side at first, but God spoke to me, and he said: “Have I ever let you down before?

“The voice told me I wasn’t going to be paralysed, but that I would have a severe neck injury, and when he said that there was an overwhelming sense of calm that just came over me.

“I had to learn how to walk again, to sit, to stand, to eat, to wash. That’s when I opened up the door to recovery, to a better life, in a very weird way.”

This spiritual presence was something that Rocliffe had always experienced, if not truly understood. Training diaries for his previous life, one devoted to competitive swimming, often included references to God.

With his charity now in its fifth year, the issue of homelessness in America is something that inspired him to be the cause of change. Proactive, reactive, just active in any way. A drive to be a source of light in the darkest alleyways.

While residing across the Atlantic, he met a mother and a son in a diner who had been living in a sewer. That moment clearly still hits home. It takes an emotional toll, but in many ways, that is what charity thrives off.

The PIP Foundation is no different.

“What we represent is love at the end of the day. I have a lot to be grateful for, for example, not being paralysed with six broken vertebrae in my spine.

“That love definitely shines a light through everything we do, no doubt.”

So why Galway then? Why haircuts? For the PIP Foundation, it’s all about building a platform. It’s about laying the foundations for a new life. That is something that requires a shift in perspective, and some help, when your bed is composed of some city council concrete.

“It revolves around employability when it comes to working with the homeless. As a charity, we’re five years old, but we’re constantly trying to get better.

“I actually got my hair cut by a young lad called Malcolm McEvilly from Westport. I get my hair cut with him regularly, and we got chatting about the work that we’re doing, and he straight away wanted to come on board.

“These people on the streets are just like you and me. At the moment, we’re giving out haircuts and I’m sure their self-esteem will raise a little bit, but moving forward, can they get a bank account? An ID? Can they look appropriate for interviews? Can they develop a CV once there is a roof over their heads?”

A Life in the Streets

One of the people Rocliffe and his volunteers bumped into was a man by the name of Patrick. A fisherman half a decade ago, he now spends his days and his nights exposed to the elements of Shop Street.

Rocliffe witnessed a member of the public in a drunken state kick the tent in which he resides. An apology quickly followed when the man involved was called out.

It highlights however, that homelessness is more than just life without a home. The lack of social supports is something Rocliffe is keen to stress.

It seems there is the perfect mix of ambition and realism.

“Are we going to solve homelessness right now, in our infancy, which is where we’re really at? No.

“Do we want to solve homelessness? Absolutely. If we were out of a job tomorrow and homelessness didn’t exist, we would be very, very happy.

“I’d like to think that’s the difference between what we do, and what a lot of the bigger charities do. Homelessness is a very profitable business. We don’t deal with monetary goods. We deal with people who want to donate their time voluntarily.”

Rarely a day goes by where we don’t hear about homelessness in some context, on some platform, in this age of mass media. For the PIP Foundation, this is a challenge in itself.

Over-exposure can be as big an issue as ignorance. People become figures, and the emotional ties can quickly unravel.

“People, including myself when I was younger, walk past these people on the streets. You can’t really relate to them, unless it’s an uncle, it’s an aunty, it’s blood.

“It’s abstract. This is a person on the street, but you don’t feel that way. The conversations that you have, you realise that he might sound like your dad, or he has a very similar background to my uncle or whatever the case may be.

“I mentioned it to Patrick the next day about the young lad kicking his tent, but he’s just seen so much by now that he didn’t even bat an eyelid the next day. The next day he just got on with things, but it shouldn’t be that way either.

“Compassion is a very important thing.”

The numbers cannot be ignored, however. The total population in the streets currently reads 8,000. It is a concerning number, heading into this winter of all winters, and Rocliffe admits that he is “gravely concerned”.

Mental illness caused by addiction, depression, or other disorders such as bipolar and schizophrenia are deemed to be major contributors to these figures. In terms of reducing numbers, the PIP Foundation founder believes there are plenty of political steps that can be taken.

“There’s no means to an end, it’s just a revolving door of people coming in and out. In Finland, they’ve totally done away with homeless shelters in place of social housing. You need to have a sturdy roof over your head.

“These bigger charities are making millions upon millions, and this problem still exists. If that money was being used the way it should be used, there would not be homelessness, for sure.

“I understand that not all of those houses are ready to go, health and safety checked, but there’s people sleeping on the streets.”

Rocliffe has been in some dark corners himself. It’s the reversal of fortunes that makes it all worthwhile. But change requires momentum.

Five years ago, he sat in a train station in Limerick. His head was angled towards the ground, his thoughts dragged down almost by gravity itself.

After failing to secure volunteers, he had single-handedly delivered packs to the homeless of the Treaty City. Mentally and physically drained, he had decided this was the time to give it all up.

Until the game of life dealt him another hand. 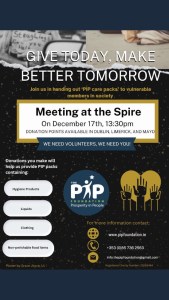 “I had this unbelievable moment where I was sitting down looking at the floor. A guy walked past me, and I noticed straight away the paint on his pants. I didn’t even look at his face.

“It turned out they were actually my pants, that I had put in a pack three months previously. I looked up, and it was a guy I had met in Dublin, and that was all I needed.

“This goes out to everybody; you don’t even realise the little things that we do mean so much to others. I always start by telling that story to new volunteers.”

The PIP Foundation’s next event is on 17 December, where care packs will be handed out from the Spire in Dublin.