The sight of hundreds of young people donning Christmas jumpers in Galway in the middle of November may seem quite unusual, but this annual event is a student’s dream and continues to be authorities and the locals of Galway’s worst nightmare.

A once charitable event, ‘Christmas Day’ in Galway can form great excitement for many students living in the city and with it, an overwhelming feeling of dread for locals.

The University of Galway once had a strong hand in overseeing and raising funds for local charities in Galway, through fundraising events on campus and venues in the city.

Throughout the years the event lost its aims and became clouded by excessive drinking, serious damage to public spaces in the city and drug usage. The university recognised the negative media attention the day was receiving and distanced itself from the event completely in 2018. The event was taken into the hands of the students from 2018 onwards as thousands descended to pubs in the city, queuing from 8am in popular venues like Hole in the Wall, Fibber’s and Barr An Chaladh.

Several businesses across the city have made it clear they do not want anyone wearing a Christmas jumper’s or associated with the now drinking event, on their premises, putting posters on windows with large X’s crossed over an image of a Christmas jumper. Other pubs of course profit greatly from the event and welcome students advertising alcohol offers, early opening hours and live music like popular student bar Fibber Magees. 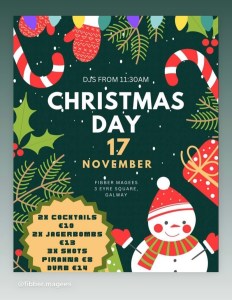 Last November Gardaí reported that on the day several arrests were made due to antisocial behavior and public indecency. Many pubs display signs on their windows explaining anyone wearing a Christmas jumper will be denied access. 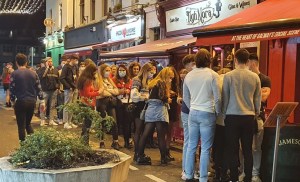 “ Storming up through the streets”

“I understand students have been locked up due to Covid, but how has the university not stepped in giving them something else to do? The day is full of students storming up through the streets, barely able to walk and actually scaring people. If they just acted human, there wouldn’t be an issue.” 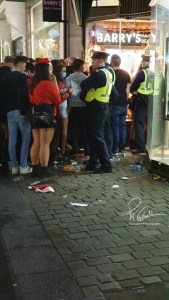 Last November Gardaí reported that on the day, several arrests were made due to antisocial behaviour and public indecency. Many pubs display signs on their windows explaining anyone wearing a Christmas jumper will be denied access. With no talk of the university formalising the event in the future, the concerns remain the same and continue to shed a negative light on the once ‘charitable’ event.

“Never attempt to reason with drunk or aggressive people.”

“Be streetwise when you’re out and about. Planning is key to having a good night out. Arrange transport to and from events in advance. Let someone know where you are going and when you’ll be back. Avoid walking alone and in dark places. Be wary of your surroundings and mind your property. Never attempt to reason with drunk or aggressive people. Walk away and look for help.”

University of Galway Students’ Union have addressed the university distancing themselves from the event due to “security concerns, ‘high level of drinking’ and disruption to classes”. Students will continue to celebrate in the city from the early morning into the night on 17 November this year. ‘’