The downfall of Galway night-life

Galway used to be known as the place to be when it came to night-life, whenever you needed a night out, there was at least 20 different places for each night of the week, with all different genres of music to choose from.

How it used to be

Over the last few years, Galway City’s night club scene has been deteriorating at a rapid rate. With the two big universities here, a night out in Galway used to be second to none. The COVID-19 pandemic has had a massive impact on this.

John O’Connor, a London native who moved to Galway in 2006 has started running events to help bring Galway’s nightlife back to what it was. He has started an Instagram page @amodernmovementgalway, which essentially hosts events to cater to a different demographic that is currently being overlooked in the city.

A Modern Movement Galway is trying to give up and coming musicians around Galway places they can play. They also are beginning to give a platform to DJs.

Their goal is to have a safe place where people who work nine to five Monday to Friday can go on the weekends to enjoy themselves.

John said: “We noticed that there was no places in Galway with the acts we wanted to see.”

When John first arrived here, it was one of the best cities in the country for nightlife. The fall of this is mainly down to the fact, people cannot afford the nights out here anymore, alcohol pricing has rose, which causes a snowball effect to the closure of different venues, so musicians and DJs have less places to play.

According to John, “It is crazy just how bad it’s gotten.”

In John’s opinion, the “West End” in Galway was the place to be in 2006. Each and every night, you could find at least 50 different places to spend your night, all suiting different music tastes and at a price that students and young people could afford.

This directly affects new musicians and bands who want to get their names out there. John declares, “it has never been this hard to be a musician in Ireland”, because there are very limited locations for them to book a gig, and to make money. “Years ago, they would have been met with so many opportunities.”

People coming into their first year of college have nowhere to go for an affordable night out. John ponders: “When they don’t have a nightclub, and they don’t have somewhere specific they can go, because a lot of places are 21s and over, they end up acting out, and being messy because they’ve nowhere to let off steam.”

“It makes no sense to have most bars be 21 and over in a student central city,” he added.

The loss of nightclubs

COVID-19 has had a massive impact on this, because a lot of places after the pandemic never opened back up. 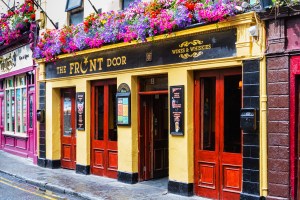 The biggest loss to nightlife in Galway city over the past five years is Electric Nightclub. Those who ran it and the vibe they cultivated has not been matched anywhere else.

After 30 years, Electric finally closed its doors in 2020 for the pandemic and never reopened. It lasted throughout the recession and many other obstacles and unfortunately never came back after the pandemic. Electric booked some of the best DJs in the country in its time.

Many other places in Galway had to close due to COVID-19, that never reopened. For example Four Four nightclub, beside Electric, was a place for 18 year olds to go to have a good, affordable evening.

Another loss to Galway’s nightlife was the nightclub Carbon that closed back in 2019, after nine years of business.

The Skeffington Arms has recently requested planning permission to build a 44 bedroom hotel in its place. Which, if granted, will lead to the closure of the last remaining nightclub in Galway, DNA.

The future of night life in Galway may not be looking bright. But it is definitely refreshing to see what people who truly care about the future of the city’s nightlife are doing to help.

@amodernmovementgalway are hosting a gig on Saturday the 24th of September in the Loft in Seven Galway, with more information on their page.