A man, a robin, and a polytunnel: The story of Martin Nolan and the Galway City West Men’s Shed

A makeshift library in one corner of the room. A dartboard in another, and a kitchen in the process of being equipped with an oven and a hob, all surround a wooden table in the centre of the room.

Sat at the table of the Galway City West Men’s Shed is Martin Nolan. He’s wearing a beanie hat with a tartan woollen scarf wrapped around his neck. A stray milk chocolate digestive biscuit sits across the table from him having escaped the clutches of the biscuit tin. He gets up to stoke the fire, tending to the flames to encourage more heat into the room. A small puff of smoke escapes making its way to the window. The smoke dances at the window for a moment before dissipating, leaving a clear view out of the window of the allotments and a polytunnel.

Satisfied the fire is burning well, Martin sits down again. It is clear that the Galway City West Men’s Shed in Shantalla is Martin’s home away from home. 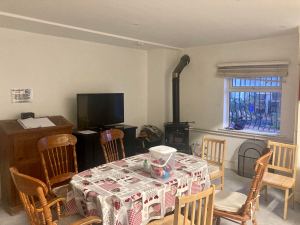 For fifteen years Martin Nolan devoted his life to his work at Thermo King. A Wicklow man at heart, he made a life for himself in Galway working as a welder. Thermo King and its staff became almost like a family to Martin, a community who he served unconditionally until his retirement in Christmas of 2009. Up until that point his Thermo King community was everything to him, but upon retiring that community was snatched away. Retirement didn’t feel like a new lease of life for Martin, but a trap.

“You don’t realise until you actually leave the job, and you go into retirement that you don’t have any place to go after that,” Martin explains. “I remember a couple of months after I retired, I still wanted to get up and go but the job wasn’t there, and I got a kind of panic attack one morning.

“It’s like walking into a vacuum and there’s nothing there and nothing to do. The first couple of weeks of retirement are a bit of a novelty, it’s like being on holidays. But the novelty quickly wears off.”

The old man with a pipe and slippers

Determined to escape the “image of old age being a man with a pipe and slippers”, Martin signed up for courses. “I felt I was still young, and I felt I still should be doing something, so I applied for a CE course in the Community Centre here.”

Martin stayed at the Community Centre in Shantalla for about a year before moving on. Several years passed before he decided to pay the Community Centre a visit. In what Martin describes as his “alma mater” moment, he returned to find a Men’s Shed in the process of being built.

Four years have since passed, and Martin is still a central member of the Galway City West Men’s Shed. It is clear that Martin has found the community he lost following his retirement. “What we say here is that the most important machine or tool in the Men’s Shed is the kettle. Anyone who joins the Men’s Shed is not expected to do anything they don’t want to do. It’s just a place to go. The only thing you have to do for yourself is plug in the kettle and make a cup of tea and you’ll find there’s other people doing exactly the same.”

Martin adds there is a stigma attached to Men’s Sheds. “I think a lot of people feel the Men’s Shed [is] not for them because they feel it’s for old people. They don’t want to accept they have gotten a little bit older”.

However, “there are so many different people here and they all have different talents and everyone’s coming in from a different job”.

Unfortunately, Martin’s four years at the Men’s Shed haven’t always been plain sailing. With the onset of the COVID-19 Pandemic in March of 2020, the new community Martin had surrounded himself with was taken away. “I’ll tell you the gods truth, it was actually a disaster. You were under house arrest effectively and you’re told you can’t go anywhere. Instead of being in Mountjoy, you’re in your own house.”

Luckily for Martin, the Men’s Shed wasn’t finished with him yet. “What I found was a real-life saving thing was that although the Men’s Shed was closed, the allotments weren’t closed fully and were open a few hours a week. You could still come down at an allotted time and work in the polytunnel.” Although life had come to a standstill, the plants still needed Martin. But Martin soon came to realise he needed them more. They offered him company and routine; everything lockdown had taken away from him.

Not only did Martin find solace in the plants, but he also befriended a robin. “Anytime I am out gardening in the polytunnel the same robin flies into the polytunnel to keep me company. He’s not sacred of me. Sometimes he’s already in the polytunnel when I open the door, I’m terrified I’m going to lock him in one of these days!”

“There’s life after your working life”

Now that society is getting back to normal after COVID, Martin hopes more people might join the Men’s Shed. “There are a lot of men that are finished working but would like to be doing something. I don’t want to say come down and join the Men’s shed and that will be the end of all your problems, but you should still come and check it out for yourself.”

Martin jokes: “For me, I felt I needed to start meeting people again without going to the pub, without playing golf. Not everyone likes golf!”

While the Galway City West Men’s Shed offered Martin a place a go and a community to be part of, it also taught him a valuable life lesson. “There’s life after your working life”.