The term love, loyalty and friendship is a phrase known all around the world, and it started in none other than Thomas Dillon’s jewellers here in Galway. The iconic ring originated in the fishing village situated in the Claddagh.

Thomas Dillons is the only jeweller in the world that continue to make the original Claddagh ring which began in 1750, at number 1 William Street. The business changed hands just once in 1920 to the grandparents of Jonathan Margetts, the owner today. For over 100 years the family has carried the legacy and quality of the famous ring.

Jonathan Margetts has worked in the family business for over fifty years and is now beginning the transition of stepping away from the workbench, that has been the Centre of his world for decades.

Jonathan was born into the family business with his grandfather buying the business from William Dillon over 100 years ago. Jonathan tells us about the early days, from schoolboy to goldsmith.

“I walked away from school when I was 16, I never did my leaving cert. The regime in the school at the time was authoritarian, to say the least. I seen all this coming. I thought I was getting out light leaving that day, but I walked into my father’s shop on a Monday morning after walking out after a dispute let’s say. I wasn’t for getting beaten into learning, I had enough.

“My father asked what I was doing out of school, and I told him I am not going back. He just replied, ‘you are going on the train tomorrow morning to Dublin, to a firm called O’Connor’s [the biggest manufacturing jewellers at the time in the country]. I was thrown straight in. I was a schoolboy thrown into an adult situation. It was a lightning bolt moment for me.

“I never wanted to be scribbling down Latin, it was there I could make something with my hands. I started by learning the basics of how to make a living with various metals. I never regretted walking out of school. I still get great satisfaction when someone comes in with one of our rings, that is years old and asks me to resize it or polish it. That’s what the lifetime guarantee is there for.” 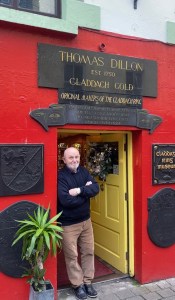 Reflecting on his career, Jonathan acknowledges and appreciates the struggle the family business went through. From a small optician and jewellery store to the award-winning jewellery shop we see today.

“Any family-owned business is hard. You must have your family behind you. Myself and my wife Eleanor pulled that business up from nothing. My Dad sold the property where the business was on 1 William Street and that was his retirement. We then moved to Quay Street, which was a derelict area at the time, you wouldn’t recognise it.

“Over 30 years ago now. My wife Eleanor is the brains behind it, I’m just the guy that does stuff, she runs the show. She made the business what it is today, and boy was it a struggle. There’s always difficulty in anything that’s worth doing well.”

Thomas Dillon’s has always stayed true to its traditional roots since 1750, never getting caught up in trends or the vacuum of commercialism. Jonathan simply brings it down to sincerity.

“We have just stayed honest. We have stuck to the same roots and practice since 1750. With many highs and many lows, we always have put our customers first, even if it has put us out of pocket at times. The amount of fun we have had here over the years. It’s always been a happy shop to work in. In some family businesses, there’s a big wall between the family and the staff. We have always been a family here; I have had great fun.

“I am coming toward the end of my working life as I’m turning 70 next year. I’m going to start with a week on, and a week off, we are going to have to start juggling. We normally take in anything, that other workshops wouldn’t even touch. There’s so little quality workmanship that could be just tapped into. Now you have to wait weeks and the jewellery is sent to God knows where and it ends up costing a fortune. If I can do it, I’ll have it done in the day or the next. Dillon’s has just remained honest.”

Jonathan looks back on his craft with joy and laughter. Growing up in the shop he has seen craftsmanship at its highest quality and hopes people still take interest in learning and creating as he steps away from the bench.
“I am tired, I am very tired,” he laughs. “This is how I feel about hanging up my boots. See if my dad was soldering on a single charm to a charm bracelet, he would polish every single charm and send it back and only charge for the solder. He would always do that to the surprise of the customer.

“The reason he felt this is the reputation of the firm was held high. The pride in sending out better than it came in. There is just no quality now. No pride in what people send out, it is just about how much you can get out of people for the least bit of work. That leaves me feeling a bit uneasy. My son, John, is the best at what he does, but for what I do there isn’t really someone for me to pass my passion and standard of what goes out. It makes me sad.”

The Galway native struggles with the idea of the lack of interest in the want to be or train genuine creatives in the trade.

“I would hate to see the ability to repair things and people’s pieces of jewellery that belong to their father, their grandmother etc., and for that shock of pure delight just not stay around the city anymore. There aren’t places around now that do that. It’s a conscience thing for me. I’d love to have someone to have it in the hands and the want to pursue it. I was dropped into it, and I was lucky it became my passion. It has been difficult.

“My trade is almost a form of madness, to get it 100% right, always trying to improve, that one step more. Slowly stepping away from the business is the next step for me though.”

There isn’t a day that passes that Jonathan doesn’t hear the famous phrase, ‘’love, loyalty and friendship’’. Yet the goldsmith still recognises the weight and importance of carrying it on and sharing the meaning amongst locals, visitors and even the cynics of Galway.

“All three things are very hard to come by these days. To get those three things in the one person, I mean. Lucky for those that do and unlucky for those that don’t. All we can do is promote it, some people really take the experience in the shop and the meaning behind the rings on board. If the ring can pass that on to anyone, then fair play to us the Irish people for passing that onto the world.”

The future for Jonathan is continuing his passion for creating, but not so much with moulding hearts, hands and crowns. 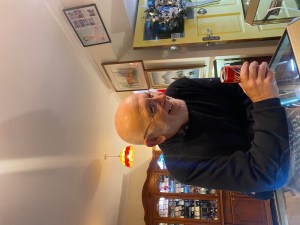 “I build models. Some guys play hurling or football and eventually they burn out of steam with age. They will sit and watch on the television or go to matches. At 90 years of age, I will still be able to sit down and build a model. All it takes is control of my hands and what’s in my head.

“I was led to believe by people in my past that building models was childish and I took it on board. I regret that. I then went out and bought a radio control glider. I sat here and opened the box and started putting it together. In that moment all the outside noise vanished, and I knew it could fly after me building it myself.”