A public exhibition commemorating the life and work of Professor Tomás Ó Máille was held at the University of Galway.

It was Commissioned by the University’s department of Irish Culture and Citizenship in memory of the first professor of Irish at UoG.

A renowned Irish lecturer, he was first appointed professor in 1909. Holding that position until his untimely death in 1938.

The exhibition was launched to the public at the University’s Hardiman Building. With guest speaker Emeritus Professor of History, Gearóid Ó Tuathaigh. It will run for three months, with plans being finalised to tour in the west of Ireland and overseas in the future.

He was well known for his commitment to audio recordings of Folklore, song and various dialects. Creating hundreds of recordings from Irish speakers from all over Connaught and Co. Clare.

Nearly 100 years after they were first captured, wax cylinder recordings held in the University of Galway Library were digitised last year with support from Roinn na Gaeltachta.

Minister of State Jack Chambers said: “I am delighted to launch this exhibition on the work of Professor Tomás Ó Máille and that my Department could fund the project for digitising the wax cylinders. This content will be valuable to both researchers and the general public, and Tomás Ó Máille’s work can now be enjoyed by all to once again hear the voices and songs of the West of Ireland recorded 100 years ago.”

“Irish language scholarship is one of the distinctive features of our University that truly sets us apart.”

President of University of Galway, Professor Ciarán Ó hÓgartaigh commented: “Irish language scholarship is one of the distinctive features of our University that truly sets us apart. I am pleased that through this exhibition, we will celebrate the very early beginning of that scholarship in the figure of Tomás Ó Máille.”

“It strikes me that Ó Máille’s work then, and this exhibition today, reflect the values of our university – in their respect for the language and traditions of the West of Ireland, in the excellent standards of scholarship, and in the open collaboration with Ó Máille’s family, funders and academic partners to sustain Ó Máille’s scholarship and his collaborators’ voices for generations to come.”

Curator of the exhibition, Dr Deirdre Ní Chonghaile, said: “This exhibition sees Ó Máille’s priceless archive come to life for the first time and bilingually. This is a celebration of the extraordinary efforts of Ó Máille as a lifelong changemaker working for the Irish language and of his outstanding legacy in capturing artistic treasures of the Irish language from every county west of the Shannon.” 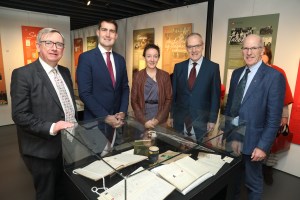 Saying: “We are especially grateful to Tomás’ son, Éamonn Ó Máille. Who, before he died, supported our efforts to preserve and create access to his father’s archival legacy. In time, Ó Máille’s recordings will be freely available at www.universityofgalway.ie/tomasomaille, and west of Ireland communities will hear their own ancestors singing, speaking, and keening nearly 100 years ago.”

The exhibition was produced in partnership with the Royal Irish Academy and the National Library. With funding from Foras na Gaeilge and University of Galway.