Leader Kicking: The World at Your Feet

A new business, a journey, for both a Leader and his army

Tadhg Leader started in Galway. His journey since has been most unorthodox, from Crowley Park, to Canada, and a little bit of Poland in between. But it has essentially been an American dream since his kicking boots first left these shores.

He has now returned home, with the Galwegians RFC roots never lost on a man who is still only 30. Fleeting would be a harsh word to describe his American football venture. After all, Ireland is not a footballing country in the American sense. Many would argue it isn’t even a rugby country. But Leader made quite the name for himself from his ventures in both.

So, what’s next for a former pro with a sports business degree and an MA in business administration? Well, in short, Leader Kicking is a business that fulfils himself and others, both on the sporting field and off it.

“Part of what Leader Kicking is about is passion and purpose, and for me, I wasn’t that excited about entering the corporate world.

Leader Kicking can be a life changing experience for Irish lads.”

So how does the process work, in a country where U.S sports can range from unpopular to alien? Three words Leader uses digest a mammoth task like a pack of Haribo’s. Or a Fulfil bar for those of us more athletically inclined. 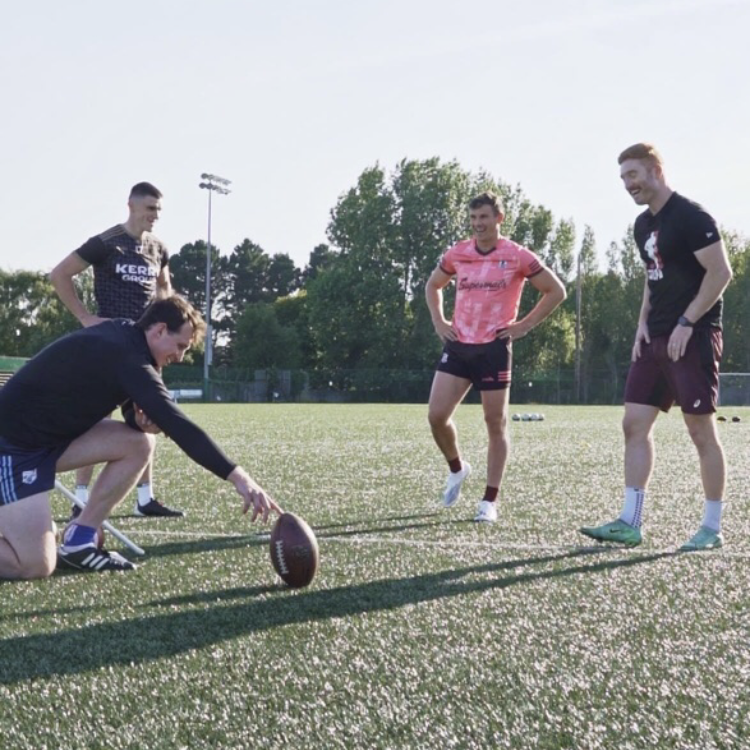 “Imagine a lad knows what he wants to do at 16, 17, and he’s a good kicker, I could identify the top 25 colleges in the U.S in physiotherapy for example and target those colleges.

It’s not all about making it as a pro. The bigger aspect is the idea you can use your ability as a kicker of a ball, in GAA, in rugby, to get your education for free.”

According to Leader, Division 1 American Football colleges average a scholarship of $250,000. This encompasses tuition, academic resources such as books, athlete quality meals, and accommodation.

Essentially all expenses covered. What’s good in life is free.

Qualification in the U.S also opens the door for an OPT visa. This allows graduates to work for at least 12 months stateside in high salary jobs, on a scale the ex-Connacht man describes as “incomparable” to home.

He has seen both sides of the coin, and with that comes contrast. The similarities are blatant, but the differences can be mind-blowing.

“I went to a game and there was 85,000 people watching 18 to 23-year-olds. I didn’t understand how the hell that worked, but the longer I stayed, the more I equate it to the Premier League. You’re going playing in these major stadiums 10 or 12 times a year. It’s phenomenal.

In Ireland the biggest issue I’m running into is just that people aren’t aware of how big the sport is and how many opportunities can come from it, just because we’re not exposed to it.”

For Leader it is all about creating that awareness. College footballers are unpaid, much like home. Unlike home, these numerous spectators may be paying up to $40 to watch a game. And this revenue is pumped into training, strength and conditioning, nutrition, psychology and more.

Do your maths and there is little amateur about it. The full professional package, granted without payment, but crucially without any expense. As an athlete, this is a level of development beyond the realms of Irish imagination. Free flights to games, police escorts, the whole works.

As the Premier League has exploded in the US, the reverse effect has been a bit slower. It was only this year that the world’s first NFL academy outside America, Barnet and Southgate College (north of London) was established. Is Leader ahead of the trend, or is the industry rather niche?

I’m very lucky that my two years playing American football and my five or six years playing rugby means I’ve established a lot of connections for these Irish lads, so I know they’re going to be properly taken care of, rather than outsourcing to businesses.

I don’t want these lads to survive, I want them to thrive and have a class experience. I’ll be hands on with these guys for the year or so I train them in Ireland, but then also ensure that they’re safe and confident for their four years in America.”

For those applicants accepted for the programme, there will be “at least” two kicking sessions a week, with a strong emphasis also on sports’ psychology. Leader is confident Irish youngsters have the transferable skills to make it. He also compares the role of a kicker to a golfer.

Their involvement is more individual. A short, sharp introduction, where you either miss or you score. Hence the importance of psychology. Strength and conditioning will also focus on some more unorthodox areas such as yoga, with flexibility a key aspect of ball striking.

It is a combination of skills that Leader so adequately describes as: “physical and mental capability to thrive in the moment”. 17-year-old Andy Quinn of Creggs RFC displayed many of these attributes in the Aviva Stadium just a month ago, earning entry into the Leader Kicking Programme courtesy of his display at half time of the Aer Lingus College Football Classic.

Successful trials will see others join him in the Immersive Programme, which factors in all lifestyle aspects. Leader Kicking is available online, as well as on TikTok, Instagram, Facebook, and Twitter for more information.